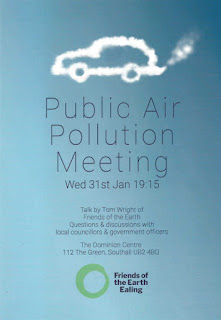 Ealing Friends of the Earth is holding a public meeting on air pollution affecting Southall at 7.15pm on Wednesday 31st January 2018 in the Dominion Centre, 112 The Green, Southall UB2 4BQ. Admission is free.


At the meeting Tom Wright from FoE will outline the problem that London has with contaminated air and suggest some of the solutions. There will be an opportunity to put forward your concerns and for discussion of what needs to be done.

Air pollution is causing an estimated 9,500 premature deaths every year in London. The British Medical Association (BMA) has called for greater action to tackle the illegal, lethal levels of air pollution in the UK, which are breaching international standards set by the EU (European Union) and the WHO (World Health Organization). Contaminated air is particularly harmful for children, as described here by the British Lung Foundation: https://www.blf.org.uk/support-for-you/signs-of-breathing-problems-in-children/air-pollution

According to an analysis for the GLA (Greater London Authority), over 400 primary schools in London have average concentrations of the pollutant NO2 that exceed the EU limit.